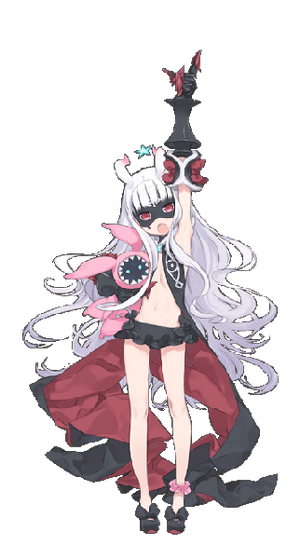 Venera (ヴィニエイラ様 Vieniera-sama, Венера means "Venus" in Russian) , also known as Kate Hoshimiya (星宮ケイト Hoshimiya Keito) is the main heroine of the series. She is the leader of Zvezda, an organization with the objective of conquering the world. Since the day she decided to take on the world, she stopped aging. Contrary to her physical appearance, she has lived for a long time. Events suggest that Kate is somehow connected to the ancient Udogawa civilization.

Kate Hoshimiya is a young girl who appears to be about 7-8 years old. As such, she has a petite body, complemented with long lilac hair. As Venera, locks of hair are propped up like demonic horns, but don't come off as impressive or grandiose.  The horns are tipped with highlights of pink.

Kate possesses a stubborn, yet eccentric personality. She has shown a capable personality. She has an ideology revolving around conquest that she doesn't stray from and explains proudly to others. She aims to conquer the world, and absolutely believes in the possibility of her goal. Kate is a very caring leader, and appears to hold the members of Zvezda close to her heart. At the dining room of Zvezda's base, there is a poster saying that anyone who eats a meal at the same table is family. This implies that Kate views the rest of Zvezda as her family.

At the very least, Kate has fondness for Asuta. She was quick to recruit him, during their first encounter with one another, and relayed to him many of her ideals and beliefs. After his pledge, she is the one that distributed Dva, his Zvezda alias. Although Asuta expresses doubt in her ideology and some of her plans, Kate appears to be comfortable around Dva, to the extent where she fell asleep on his back.

Itsuka admires Kate, and is completely dedicated to her because of her outward appearance and her cute personality. She appears to even want to apply Kate clothes during her Venera transformation sequence , which Kate allows, suggesting that the affection is not unappreciated. However, at certain times, Kate does express a small degree of aversion for more amatory actions, muttering things such as "stop it".

Yasu is a turncoat of Zvezda, and lacks usefulness as a member to begin with. Formerly, he was the best fighter of the lower ranks, by virtue of being the only member of the rank. Kate still treats him with kindness, changing one punishment from a death sentence to simply one week of no dinner. She offered him a lollipop after the group conflict with smokers that forced Yasu to quit smoking , believing that he simply needed something to place in his mouth.

Natasha is a friend of Kate, and the brains of Zvezda. Kate seems to appreciate Natasha's presence. 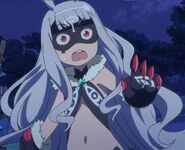 A flashback of Kate Hoshimiya